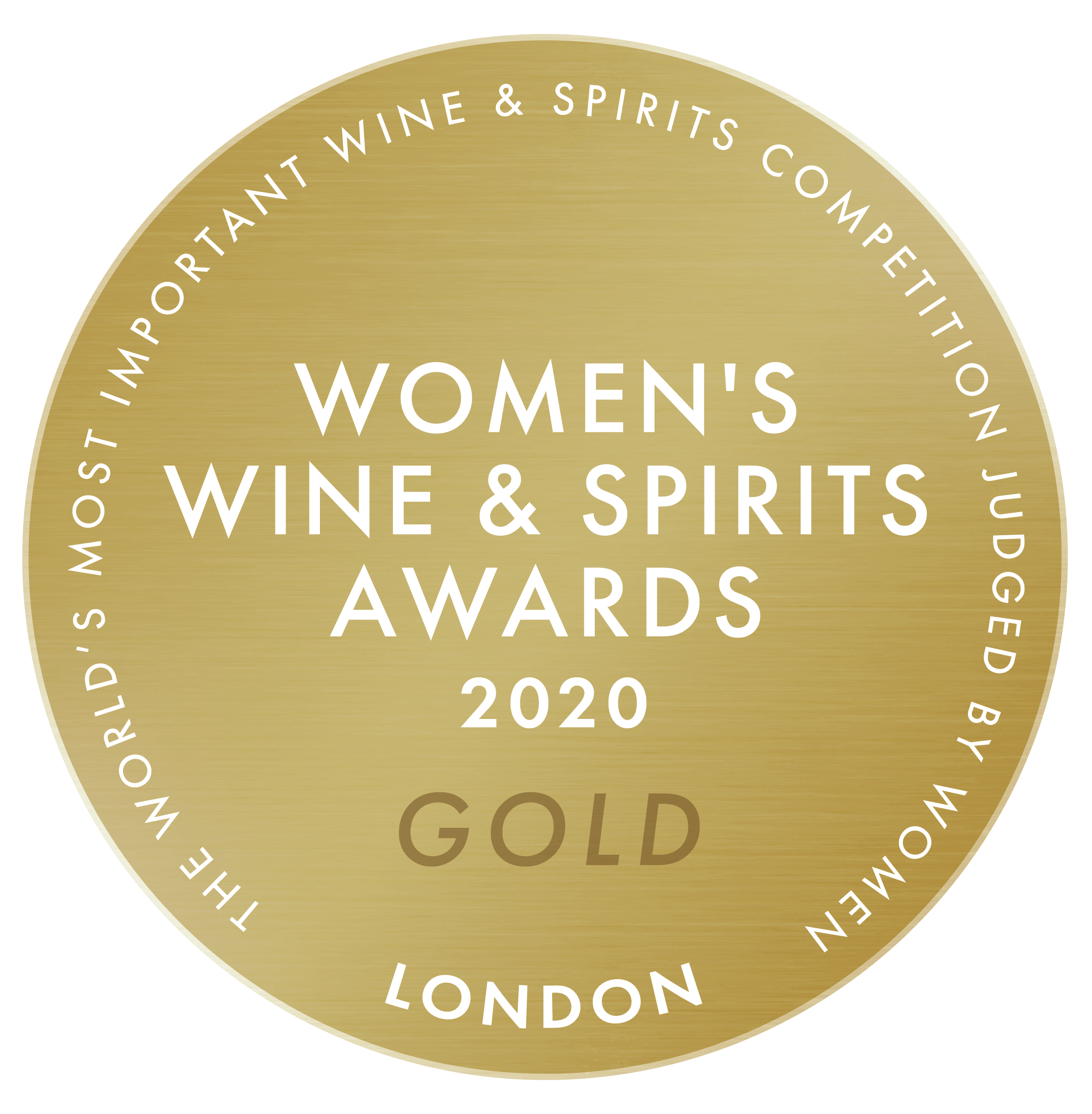 LIMA, Peru – Nov. 16, 2019 — PiscoLogía Quebranta, a single-variety Peruvian pisco made from Quebranta grapes, won a gold medal at the the most important wine and spirits competition in the world judged by women buyers – the Women’s Wine and Spirits Awards. Held in London at the Royal Yacht Club, 100 of the world’s most influential female buyers assembled for the historic occasion. Top retailers, importers, and hospitality entities were present for the blind tastings, including Waitrose & Partners, Bibendum, Enotria & Co, 67 Pall Mall, and The Arts Club.

Pisco in Canada: PiscoLogía listed with the LCBO

We are happy to announce that PiscoLogía Acholado and PiscoLogía Quebranta are now available for purchase through the LCBO in Canada! This was made possible thanks to a collaboration with the Unknown Agency, experts in growing new breakthrough beverage brands. Based in Toronto, the partners at the Unknown Agency establish routes to market, build volume and grow brand equity through sales, distribution, marketing and PR solutions.

Find PiscoLogía on the Liquor Control Board of Ontario’s website.

Have you already purchased a bottle of PiscoLogía in Canada? Learn how to mix our Acholado or Quebranta in these cocktail recipes. For more information about availability in Canada, please contact the Unknown Agency:

Myth #7- Italia pisco is too aromatic to mix in cocktails

This is the 7th post of a series of mythbusters to clarify misconceptions about Peruvian pisco. 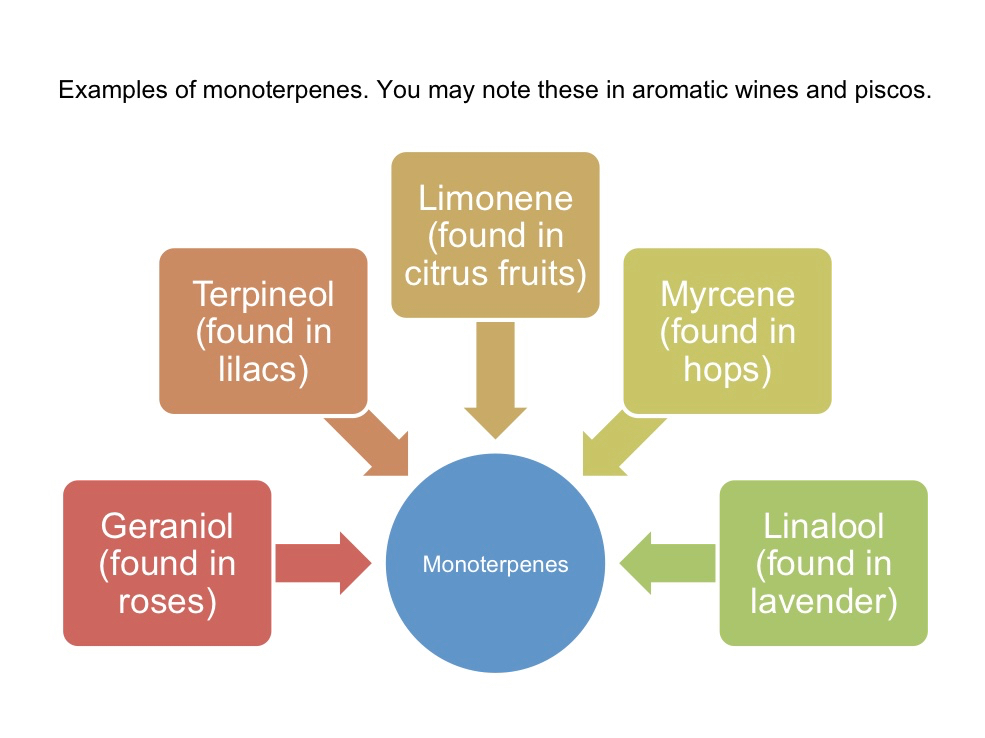 We couldn’t disagree more that Italia is too aromatic for cocktails. In fact, we think it is one of the more exciting grapes to use.  While Italia can be quite floral, it can brighten up an Acholado by creating an interesting blend with the two (or more) grape varieties.

Let’s first talk about what aromatic means. If a wine or pisco is aromatic, it means it has higher levels of terpenes, which are the same scents found in flowers (Puckette). More specifically, if you can sense aromas of rose, lilac, lavender, orange blossom or geranium in a wine or pisco, it means it has monoterpenes, which are compounds found in the essential oils extracted from many plants, including fruits, vegetables, spices and herbs (Loza-Tavera). The Italia variety is classified in the aromatic category, along with Riesling, Albariño, Pinot Gris, the 3 other aromatic Peruvian pisco grapes and many others.

Monoterpenes create special aromas, so how should you use Italia pisco in a cocktail? One suggestion would be to try it in a pisco colada because the Italia variety pairs well with the sweet flavors of coconut. Or, you can highlight the orange blossom notes in a citrus-based cocktail. If you’re drinking it on its own, an Italia pisco will enhance the flavors of a Thai curry or Tandoori Chicken.

Whether or not you like Italia pisco in cocktails will come down to your personal preferences. However, you  shouldn’t take someone else’s word for it that it is too fruity or floral. We encourage you to try it with different ingredients to see which combination is best for you.

Myth#3: Pisco grapes are considered aromatic because they have muscat DNA

This is the 3rd post of a series of mythbusters to clarify misconceptions about Peruvian pisco. 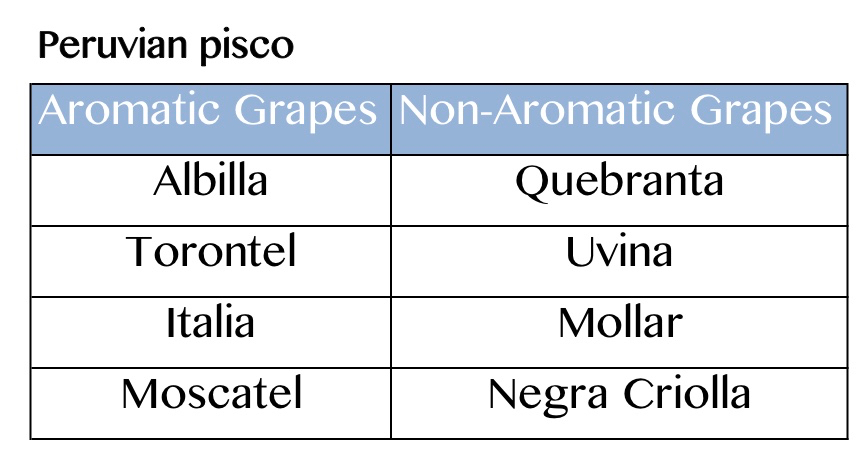 There are also Muscat-derived grapes in the non-aromatic category.

Before discussing this subject, let’s do a quick refresher on Peruvian pisco grapes. There are 8 grapes used for pisco production in Peru and they are divided into 2 categories: aromatic and non-aromatic. You can see the 4 grape varieties that fall into each category in the chart above.

There is a misconception circulating in the industry that the term “aromatic” applies exclusively to grapes with DNA from the Muscat family. While the four aromatics, Moscatel, Albilla, Italia and Torontel, are indeed derived from the Muscat grape, there are also two non-aromatic grapes with Muscat DNA: Negra criolla and Quebranta. Both of these red grape varieties come from Muscat of Alexandria (Moscatel de Alejandria in Spanish).

The DNA of all the Peruvian pisco grape varieties is best explained in the chart created by Nico from Pisco Trail:

Now if you hear the rumor that aromatic pisco grapes are the only grapes with DNA from the Muscat family, you can disprove it. Muscat of Alexandria gave life to the aromatic Italia variety, but it also deserves credit for giving us lovely non-aromatic Quebranta and Negra Criolla!

The word “pisco” and its many variations (pisku, pisccu, phishgo, pichiu etc.) have been documented in Peru for almost 5 centuries. We have summarized the research of historians Guillermo Toro-Lira Stahl and Gonzalo Gutiérrez in this blog post, following the evolution of the word since its first inscription to its current connotation: the clear brandy we drink today.

Because of the sheer quantity of birds that populated the coastal waters near Ica, people began to call the entire area “Pisco”. The earliest evidence of this is a map of Peru drafted in 1574 by geographer Diego Méndez, where the port of Pisco is clearly delineated. However, it wouldn’t be for more than 300 years later in 1900, when the province of Pisco was officially created with a capitol of the same name.

The Spaniards started distilling wine in Peru at the end of the 16th century/early 17th century, but the clear brandy wasn’t called “pisco” for quite some time. According to Gonzalo Gutiérrez, the oldest documentation of brandy production seems to be from 1613, in a will of a man named Pedro Manuel. Among the deceased’s possessions were several containers of aguardiente (brandy). This proves that brandy production had started in Peru. However, the first reference to “pisco” as a brandy didn’t appear until 200 years later.

Guillermo Toro-Lira Stahl discovered what he believes to be the first association of pisco as clear brandy. In a customs document from Lima dated in 1808, 42 containers of pisco were received from Ica. Below you can see the diminutive word, “pisquitos”. Mr. Toro-Lira Stahl believes this document marks the new nomenclature for the term we use for the clear brandy today.

From that point on in the 19th century to present day, there are thousands of references to Peruvian pisco as a brandy. Two examples are below:

Pisco Punch is “compounded of the shavings of cherub’s wings, the glory of a tropical dawn, the red clouds of sunset and the fragments of lost epics by dead masters.” Rudyard Kipling, From Sea to Sea, 1889.

The name “pisco” has had many connotations over the course of 5 centuries. Chronicling the etymological trail of the word leads us through an interesting historical journey in Peru, starting with Pre-Colombian tribes and ending with our favorite clear brandy.

Toro-Lira Stahl, Guillermo, Luis. (17 may 2019) In Facebook [Personal Page]. Retrieved May 17, 2019, from https://web.facebook.com/guillermo.torolirastahl