Ambassador Gutiérrez Announces Publication of ‘The Denomination of Pisco and Viceregal Trade between Peru and Guatemala, 1712-1715-1742 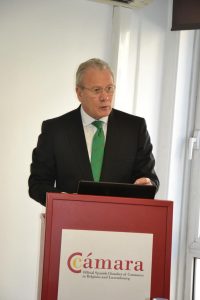 Documenting Earlier Evidence of the Use of the Word “Pisco” as the Peruvian Clear Spirit, the Article Further Reinforces that the A.O. of Pisco Belongs to Peru

Ambassador Gonzalo Gutiérrez presents new evidence about the origins of Pisco in “The Denomination of Pisco and Viceregal Trade between Peru and Guatemala, 1712-1715-1742”. In this historically important article, the Ambassador examines trade documents from 1712 that demonstrate the word “Pisco” referred to the clear spirit at least 17 years earlier than originally believed. “Based on my past research, the first reference to pisco as a spirit was presumed to be from 1729. However, this recent discovery proves that the pisco eau-de-vie was a commodity shipped from Peru to Mexico and Central America as early as 1712. This remarkable and exciting breakthrough could be the tip of the iceberg, as there are likely more trade documents preceding 1712”.

The registry of the “Our Lady of Solitude” ship in 1712 in Acapulco indisputably proves that the expressions “pisco spirit” and “clay jars of Pisco” were used to describe the beverage from Peru at the beginning of the 18th century. This is the first known use of the appellation in the world. Pepe Moquillaza, a brand ambassador for Marca Pisco in Peru, stated: “The topynomic reference required for an A.O. comes from the Quechua word “pishku”. Then the pisco A.O. solidified through its continued use in commerce, like all the other historical appellations in the world, such as cognac and champagne. That is, demand for a product begins to attribute quality to a product from a place of origin. The fact that the high quality spirit was demanded from the port of Pisco even earlier than believed, unequivocally proves that the D.O. of Pisco belongs to Peru”.

Gonzalo Gutierrez is the current ambassador of Peru in Belgium, Luxembourg and the European Union. He has also been the Minister of Foreign Affairs in Peru and the Peruvian Ambassador in China and for the United Nations. He recently released “The Misleading Name of Pisco Elqui”, an essay revealing a trade scheme mounted to circumvent regulations on the use of geographical names to designate spirits.

Pisco from Peru is the oldest grape spirit of the Americas. Distilled in the tradition of ancestral spirts (eau-de-vie), it is clear and unaged. According to the IWSC (International Wine and Spirits Competition), pisco is one of the 5 biggest spirits trends in the world, as seen in its rising popularity in the 2019 competition.