PiscoLogía: The Craft of Batch Distillation 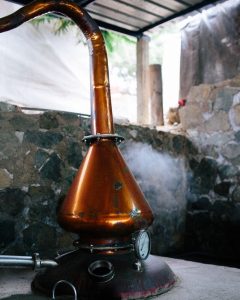 Fermentation is now complete, which means native yeasts have converted our sugary Quebranta and Italia grape juice to alcohol, leaving us with tanks of unaged wine. Soon Nati will start distilling this wine in our 300L copper pot still. PiscoLogía is made using batch distillation, which allows for greater flexibility and promotes Nati’s artistic expression through pisco-making.

There are generally two types of distillation used to create alcoholic beverages: batch and continuous. Continuous distillation is an efficient method of making large quantities of liquor with uniform flavor. On the contrary, batch distillation is more versatile. We believe it allows the consumer to appreciate the true skill of the distiller.

In addition, distilling in small quantities allows us to adhere to traditions that have existed for thousands of years. Archaeologists have uncovered the first artifacts associated with batch distillation believed to be dated over a span of 3,000 years from “the end of the fifth millennium BC to the end of the second millennium BC”. (Belgiorno 21). Using a method that has been perfected over the course of several millennia provides us great satisfaction. It also gives us more flexibility to create an artisan product. Every single batch of pisco that we make is unique. Continuous distillation gives you a consistent product, but consistency isn’t something we strive for when crafting our pisco. We want each and every batch to show Nati’s distilling skills, to reflect the terroir of our vineyards and the characteristics of harvest that year.

So, how does batch distillation work? Remember, Peruvian pisco is distilled only one time, which means Nati has only one chance to create an exceptional pisco at the desired proof . She first loads our copper pot still with wine made from our estate-grown grapes. The still is then heated until the wine boils at a temperature of 78.4 °C/173.12 °F (This is a lower boiling point than water, so the alcohol evaporates faster than water). The vapors travel up the neck at the top of our still, down the lyne arm and into the condenser, where they cool. As all experienced distillers do, Nati separates methanol and other impurities during this process by removing the initial and final condensed liquid (heads and tails). The final result is a pure, delicious Peruvian pisco.